This morning was 4 x 1km speed with a 1min 30sec standing rest and with the nice cool morning I was primed for the run.  Missy the golden retriever noticed her lead and then the whimpering with excitement started.

Now our old golden retriever Rufus, loves a walk, but he ain’t no runner! (a story for another post) So Missy and I need to sneak out without Rufus knowing – thankfully Diane kept him amused.  A short drive down to the Mullum Mullum Creek trail for our run. 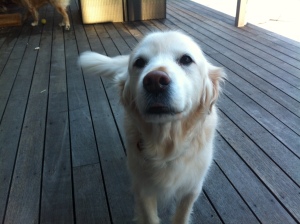 Now, I’m not sure why it happens, but invariably it always does when it is most inconvenient.  We had not gone more than 250 metres and then Missy stopped, squatted and laid a huge pile of barkers’ eggs (aka poo).  Have you noticed that when the dog decides it has to go it is usually:

Well, she chose a spot where she had an audience and I was mid sprint when she decided it was time to stop.  Thankfully I had plastic bags for such an occasion tied to the lead.  One problem with the Mullum Mullum Creek trail is that there are no bins – anywhere for the entire run.  The prospect of sprinting down the road carrying a bag that was only a thin layer of plastic between me and Missy’s number twos was not an inviting prospect.

So we collected, bagged and left the packaged barkers’ eggs beside a tree to pick up on the return.  And to the nice ladies that passed us midway through the bagging – yes we did pick up the bag and put it in the bin.

This little distraction slowed down the timing on Endomondo as it took me a while to pause the recording.  With that behind us off we took at speed.

First km down – disrupted so low.

Third km – big oops here.  I took a wrong turn too early on the trail and before I knew it Missy and I were trying to sprint down a dodgy little thin spindly trail through knee high grass.  I could see the dog looking at me as if to say “Where the hell are you taking us?”  Of course the trail became a dead end so we had to backtrack which totally screwed our time.

Fourth and final km – slower but no distractions.  However I did find the last 300-500 metres I was dragging Missy along.  Overall the time was a shade over 19 minutes for 4km – the run can as recorded on Endomondo is below:

Missy was quite keen to climb into the back of the car and get home, as can be seen from the photo, following our run. 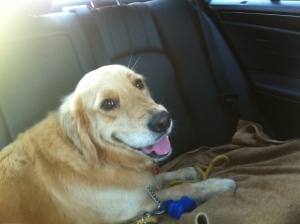 Today I decided to listen to music on the run while we ran and for the walk afterwards which was our cool down – normally I don’t while with the dog.  Top 5 running songs from today’s playlist were:

I Wanna Be Sedated – by The Ramones .. (btw this is also my ringtone)
Gone Daddy Gone – by Gnarls Barkley
When the Sun Goes Down – by Artic Monkeys … in fact anything by Arctic Monkeys is good to run to.
Bless My Soul – by Powderfinger
Starstrukk – by 3OH!3 …. no smart comments please!

So the intervals training session was done, not as slick as I would have liked, but nevertheless it was a good hit out – I wonder what time we could have made without wrong turns and barkers’ eggs!