Firstly, apologies for being a bit slack with my blogging – I’ve been traveling and haven’t been able to squeeze in the time to post – even though there’s been a bit to tell!

One thing I really enjoy about running is going at a pace (no laughing) that enables you to enjoy the sights while getting some exercise (much better than a treadmill!).  Last week I went for two fantastic runs that allowed me to take in some fantastic sights.

Firstly, I was in Sydney for work and due to the inconvenience of traveling I had missed a run during the week so made time to head out on Friday morning for a solid hit out.  The run was from Darling Harbour along the waterline, under the Harbour Bridge, around Circular Quay right to the foot of the Sydney Opera House then back.  10kms all up completed in 50 minutes…. the joys of no hills and hardly any traffic to dodge – bliss!

But what iconic sights to be able to run past. 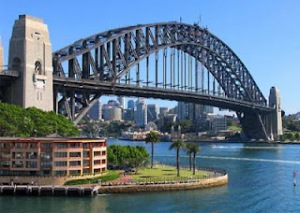 The run was recorded on Endomondo and you can check it out at the link below.

Earlier in the week I had the most mundane running schedule – 7kms of running up hills at speed and jogging down hill.  Missy the OCD golden retriever came with me which meant a minor shift in my plans – I was planning to just run up the same hill and jog back down.  But this was doing Missy’s head in.

As we tore up the hill at a fair pace she was excited and looking forward to the run, only for me to stop at the top of the hill and jog back towards home.  This attracted a quizzical look from Missy as if to ask “Why are we going home?” only to turn around and race up the hill again, before turning around again.  So, I elected just to head off on a hilly run and just sprint up the hills and jog down down them.

Total distance was 7kms which was supposed to be 15 x 300m hills – so my run was not exactly the same as the program but close.  Missy’s fitness was tested as we entered the last km – I was dragging her up the final hill her tongue hanging out the side of her mouth… let’s just say she enjoyed her drink when we got home!!

I didn’t see the value in posting the run link from Endomondo as it was doubling back a lot to keep up and down the hills.

Now the other BIG run this week was the Run for the Kids race to raise money for the Royal Children’s Hospital in Melbourne.  Total distance was 14.38kms along roads that are not open to foot or bicycle traffic and around some great parts of Melbourne.  Under the Domain tunnel, over the Bolte Bridge, past Etihad Stadium around the Docklands, through Melbourne CBD, over the Yarra River along Southbank Boulevard, past the Arts Centre and into the gardens to finish.

The view from the top of the Bolte Bridge was pretty awesome.

Quite a few friends were on the run also – along with 33,000+ other runners which delivered over $1.6m raised for the Royal Children’s Hospital.  Details about this fantastic event can be found at http://www.r4k.com.au/r4k/

Congrats to those who completed the run – it was a perfect day for it!!

Some photos from the run – first the HUGE crowd and second Rakesh and I.  Rakesh is also on the team for the GC Marathon joining the drive to raise funds for the Fight Dementia campaign.  It’s going quite well and you can check out our progress at

You can check out the run from the Endomondo link below:

My goal was to complete the run between 70 and 75 minutes as part of my training program and was pleased to finish in a shade over 73 minutes.  Justin was the fastest of my friends coming in around 63 minutes – well done JD!

This week’s Top 5 running songs from my Running Playlists are:

The training program lifts this week with a 2hour 20min next Sunday, some intervals (good for Missy) and long runs during the week.  I’ll be sure to post new photo’s of Missy on her next run (I’ve had a few requests).

With only 13 weeks to go to the big one it’s time to start pushing the envelope just a little bit more.

Have you been on any iconic runs?  If so be sure to share.