5 weeks to the GC Marathon…

It’s now under 5 weeks until the Gold Coast Marathon and training has been going reasonably well.  In 3 weeks time I will be as toey as a Roman sandal thinking about the race.

Yesterday was my longest run since the marathon last year being 37.5kms in 3hrs 31minutes… and I pulled up better than I thought I would.

With 6 weeks to go the program had suggested a 3 hour run.  However, my goal for the run was to run at an average of around 5min 30sec kms and to run at least 35kms.  Pretty close on both fronts…. Why go against the program?

Last year during the GC Marathon the wheels fell off my race at around the 35km mark.  It wasn’t pretty and it wasn’t fun.  For me, getting past this point was an important personal milestone.   For anyone that has hit the wall, I think you know what I mean, if you haven’t l’ll try an explain.

I had been tracking at a reasonable pace and was on target to achieve a time close to my goal.  I had got past a fair bit of discomfort, running with a full bladder for about 9kms and a blood blister under a toe-nail, but these were minor hurdles.  When I hit the wall, I felt fatigued (no surprise) but of greater concern was a general feeling of unwellness and inability to maintain focus.  I wasn’t sure if I was going to throw up, fall over or explode – I just lost the plot.

For around 8kms I pretty much shuffled from one drink stop to the next hanging out for the end of the race.  I did get a burst of energy with about 2kms to go thanks to the crowd’s encouragement and knowing I was near the end, but I was pretty disappointed with my performance.  I can look for a whole lot of excuses as to why I hit the wall, but there is only one real answer – lack of preparation.

After the race I swore I would never run a marathon again…. and here I am.   But I promised myself I would not let myself down again by being unprepared.  Running past the 35km point yesterday was my way of proving to myself that I am mentally and physically stronger than I was last year.  In fact, I have way more faith in my body’s capabilities than ever before and know I can push myself much harder and for much longer than I thought.

Seeing the Ironman performances earlier this year, I know that I have not yet begun to test my body’s limits…

My run’s for the the past week as recorded by Endomondo are provided below for anyone interested in having a peek.  I haven’t included the intervals where Missy and I tore around a wet football oval and had half an hour afterwards chasing the tennis ball – that’s the dog not me…

Tomorrow, I am starting a simulated high altitude training program that Diane bought for me via a Living Social coupon.  Four weeks of two sessions a week which I am hoping might help me lift my pace before the big race.  Will update you after I have had a few sessions.  Considering I am planning the Everest Base Camp climb for next year this will be a good exercise to feel how high altitude effects the body – should be fun!

Now my top Running Songs from my playlist, with a twist.  This week I have picked out one-hit wonder running songs.  Feel free to share yours 🙂

My Sharona – by The Knack
Mambo No. 5 – by Lou Bega
Counting the Beat – by The Swingers
Turning Japanese – The Vapors
Come on Eileen – Dexy’s Midnight Runners

Quick update on the fundraising for the Fight Dementia Campaign – we are over half way there and hoping to make the target.  You can find out more at the following location – please drop by and check it out:

It might be winter and it’s, cold, dark and wet most mornings – but every now and then you get to view a morning like this……

Early morning run with a sunrise.. 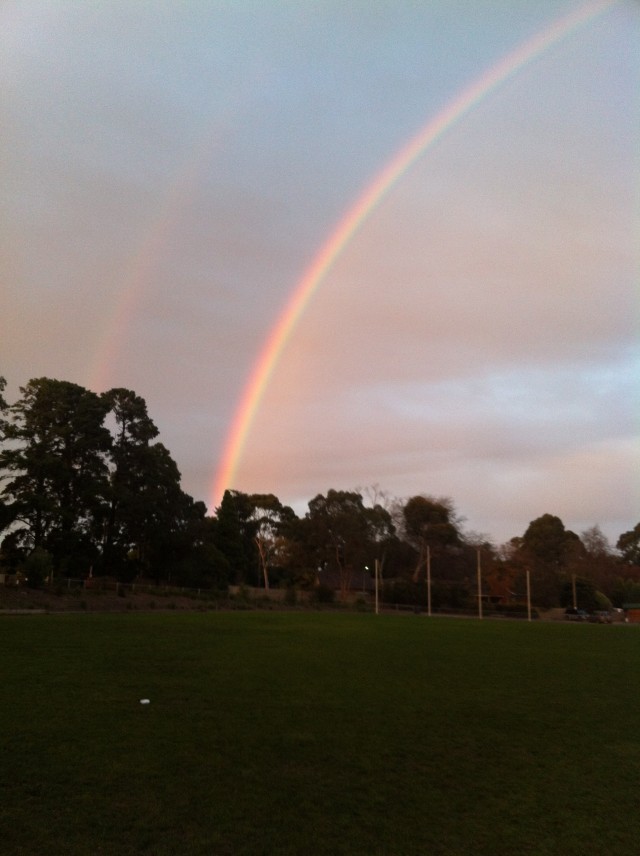